“We had just started to dabble in the idea of doing interior art and graphics,” he says. “We didn’t have murals or neon signs or custom art pieces. We thought it would be a really cool opportunity if our front desk had a neon sign, so we did one that said, ‘Never Settle.’”

The enthusiastic response gratified the team.

“Our employees, as well as WeWork members, loved seeing these, whether they were mantras or fun local illustrations illuminated as neon signage,” he says. “It organically happened as one project and then turned into a WeWork standard.”

Britton says his team has learned a lot since that first neon was created in 2013. One of the first lessons was that depicting words in bent-glass tubing is more difficult than it seems. For example, it might not be possible to represent the tight curves of an R or sharp changes in direction of a W if the lettering is too small.

Then there was the effect that different neon colors can have on people trying to get some work done. They found that attention-grabbing colors like orange shouldn’t be used in places where people need to concentrate.

Within a year after WeWork’s first neon, slogans like “Hustle Harder” or “Carpe Diem” gave way to more creative imagery. Britton says that WeWork 5792 W Jefferson Blvd in Los Angeles, with a neon sign depicting fingers spelling out the letters L and A, was one of the first to experiment with more inventive signage. “From there,” he says, “it just exploded.” 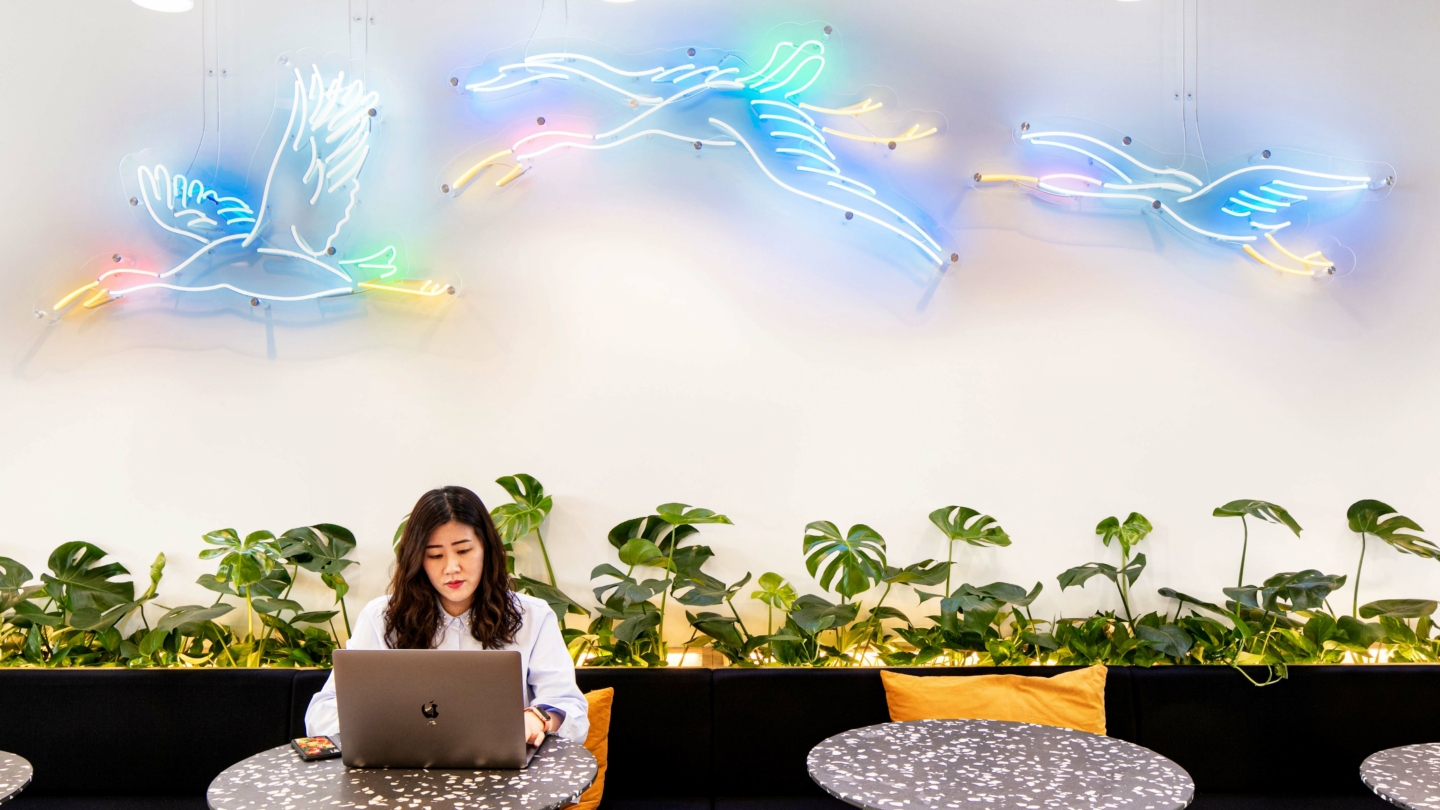 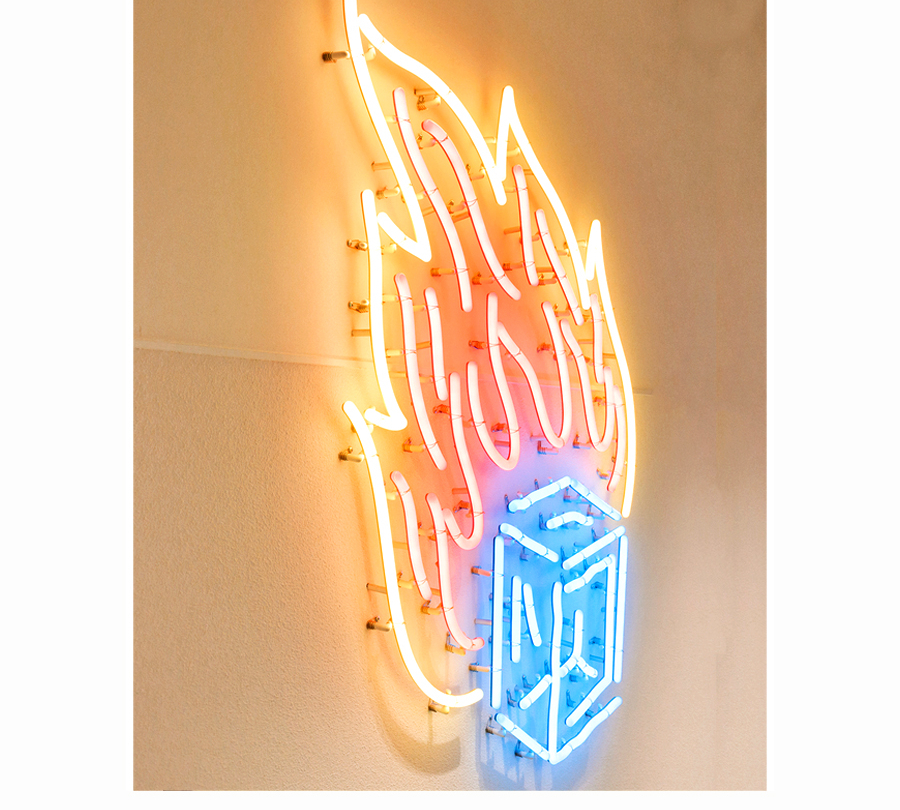 That first image gave way to dozens more around the world, from a thumbs-up or peace sign to a palm tree or some waves. Designs are sketched out on paper and fabricated at a New York studio called Let There Be Neon, which creates works for artists like Tracey Emin, Doug Wheeler, and Martin Creed. The whole process takes four to six weeks.

A flaming ice cube at WeWork Iceberg in Tokyo is a tongue-in-cheek play on the building’s name. “The idea was that it may be the Iceberg building, but we’re going to set it on fire and bring it to life with our vibrancy, our energy, and our people,” Britton explains.

At WeWork’s West Coast HQ in San Francisco, neon animated Rock-Em Sock-Em Robots battle it out, reacting to each other from their respective sides of a pantry wall. As one robot punches, the other one leans away. Sometimes one’s head pops up when its opponent lands a punch.

“It took a lot of us working with the vendor to figure out the timing,” says Britton. “Because it’s one thing to draw the illustration but it’s another to figure it out so it looks like they’re actually boxing each other.”

Other designs include outlining the front desk at New York’s WeWork 125 W 25th St with neon, creating an “explosion” of color.

WeWork amps up neon by placing it between mirrors. “All of a sudden,” says Britton, “you have millions of concentric circles going into this wall. Or it says, ‘Hello’ or ‘What’s Up?’ a million times, because it’s getting reflected back and forth inside of this little mirror box. That’s a cool, modern take on something traditional.”

More recently, Britton says, designers have created neon for some of the companies who have taken space in a WeWork building or have asked WeWork to design their own headquarters.

“We’re working with clients who expect our WeWork aesthetic to be put through their lens,” says Britton. “So they already have that understanding and get really excited. They end up being much more interested in fun, quirky things, like a squirrel eating a piece of pizza, as opposed to their logo.”

Britton says that there’s a joy in working with a medium that can simultaneously seem old-fashioned and cutting edge.

“Part of the magic is that it’s not new technology,” says Britton. “Neon has been around since the 1920s. It’s really cool to have this very old, blue-collar craft now be fine art and so much a part of our contemporary language.”