Secrets to long-term success from the queen of real estate

Barbara Corcoran on the power of trusting your gut, visualizing your future, and betting on New York City

EXPERT INSIGHTS
Barbara Corcoran
December 17, 2020
IN THIS STORY
Your gut has years of wisdomTreat your team as if you work for themListening can help grow businessThe workplace has a new functionNew York City will always bounce back

When I was starting out in my career on a sublease desk, I’m not sure exactly what gave me the vision that one day I’d be the queen of real estate—but it had something to do with a pink princess phone. When the phone company installed my landline, they offered me a few colored options. When I heard pink, it felt fancy, so I said “I’ll take it!” I picked up that phone and I just saw myself as the queen of real estate. I took on the tone in my voice and grew the dream in my head.

Visualization is my gift, and that dream inspired my business plan. I visualized the clothing I would wear, the office we would build, and the team around me asking questions that I’d answer. I never let go of that image, and I built my business toward it, again and again and again. I can visualize the big picture and say, “We’re opening an office of 80 people. The first third will be productive right away, the next third may take six months to get there, and the last third won’t be productive for about a year. So we will need this much money.” That’s what guided me. I could always see everything in advance.

Your gut has years of wisdom

I rely on my gut. I lost a lot of money my first three years on Shark Tank because I was asking the wrong question: “Will the business be good?” But then I got smart. I realized I should be shopping for people, not companies. I now have a basic report card I use with all Shark Tank competitors:

I’ve learned to trust my gut. Everyone has a gut feeling—we are all smart enough to size someone up the moment we meet them. When you think about your gut, it’s the accumulation of everything you’ve lived in your life. I look at someone and think: If there were a war and I had to throw my young kid into their arms for safety, would my kid be OK? That’s how I trust my gut.

This strategy never fails me. A few years ago, two guys walked onto the set and we didn’t know how they got through to Shark Tank. One was unemployed, the other was a photographer, and they were pitching a wearable blanket with a hood. Their answers to our questions were atrocious. They didn’t know what their product cost to make, they didn’t know what to sell it for or who to sell it to. Nobody wanted that business. But something in my gut said to give these guys a shot. So I bought a third of their business, and to date they’ve done over $250 million in sales. Nobody saw that coming! That’s called trusting your gut.

Treat your team as if you work for them

The goal of every great manager is to have each team member fully blossom and bring the most to the business. As the boss, having the right headset, or mindset, is crucial. You have to think of it as if you work for those people. They don’t work for you. And you do everything in your power to spoil them. That was my attitude—and what I got for it was extreme loyalty—because my people knew I had their backs every day.

Recognition is a more powerful paintbrush than all the raises in the world. Bonuses work better than raises. People expect raises, but a surprise bonus that immediately acknowledges something well done is powerful in encouraging that behavior in the future. I use recognition every point along the way to build and reinforce those behaviors I want to grow.

It’s important to put those recognition systems in place, because a leader can’t be there to recognize every good deed once they have a staff of 500. You need a system to pick it up, recognize, and grandstand it. If I hadn’t done that, my company would have lost its charisma and its ability to build great people. Today, I could look at anyone in that company and think they would be less good if they were working somewhere else and not here.

In my business, I’ve pivoted—is anyone else getting sick of that word?—to the next opportunity by listening. I was always creative and willing to be in advance of the crowds. I would walk through the designer handbag department of Bloomingdale’s once a week and listen to the customers speaking foreign languages. Whenever I heard one I didn’t recognize, I’d ask the sales clerk what language that customer was speaking. And then I’d go place an ad in publications for that group of people. Because I knew those people were rich, that they were likely new arrivals in New York City who’d need a place to live—and also that I needed to hire salespeople who spoke their language.

I also made a habit of talking to the young waiters everywhere I ate. The creative community discovers new neighborhoods first, so I asked them where they lived. These were young people who didn’t have a lot of money, were often living with other young people, and they were willing to go the extra mile to get affordable living space. I heard, “We’re living in Red Hook,” and that’s how I got into Brooklyn early, before anyone else. And downtown, and Chelsea, and Soho. After the creative community came in, then the yuppies came in, then the strollers… the whole progression started happening.

The workplace has a new function

We all agree that collaboration is essential. The question is—especially this year—where does it take place? Does it take place on a Zoom call? On a phone call? I think people are finding that that isn’t real collaboration, and they are tired of it. There is a need for people to come back together.

On the other side of the equation, the great majority of us have realized we’re more efficient working remotely. People say, “I get more done at home.” Because of both of these perspectives, I think the need for the workplace will change dramatically, and it will serve a different function.

Going forward, I think the typical office will have a much smaller floor plan. You’ll train new employees at the workplace and use that space to impress clients or as a front window for the company. You’ll bring people in for collaboration and socialization, too. But I don’t think we’ll go back to the function of “This guy’s got this desk.”

People don’t want to jump in their cars and commute to work nine-to-five anymore. I don’t think you’ll get your best employees wanting that. I asked my five-person team at my small media company, “When do you want to come in?” And they said one to two days a week. That was fine with me. My people are coming in on an as-needed basis, and they’re happy to see one another, but the office has proven itself optional, not essential.

The office may evolve post-pandemic, but New York City will thrive. I am so bullish on New York because I’ve lived through so many troughs where people said the city was over.

In my early years, people said corporate America was moving out—Union Carbide and a handful of companies left, and they said it was “all over” for the city. Of course they were wrong: The city went up in price 66 percent, as I recall, in three years. The 1980s stock market crash: same prediction. 9/11: same prediction.

I brought my team together on the heels of 9/11 and told everyone to get ready for a boom in six months, and they thought I was out of my mind. But I could see everyone was falling in love with NYC every day, everywhere in the world, on their TV screens, and they were going to come back and want a piece of us. And that’s exactly what happened.

When I think about what NYC will look like going forward, I think of it as a checkerboard: All the players are going to be changed up. Right now the suburbs are hot. Even the rural areas that many wouldn’t think of driving to every weekend are hot. But that won’t last.

Barbara Corcoran is founder of The Corcoran Group and Shark and executive producer on ABC’s Shark Tank.

FILED UNDER
LEADERSHIP MANAGEMENT REAL ESTATE STRATEGY
Interested in workspace? Get in touch.
TRENDING NOW
01 Six best coworking spaces in SoHo, NYC 02 Thinking about setting up a satellite office? Six things you need to know 03 Eight things you’ll find in every WeWork 04 Eight collaboration spaces that go beyond the conference room
Was this article useful? 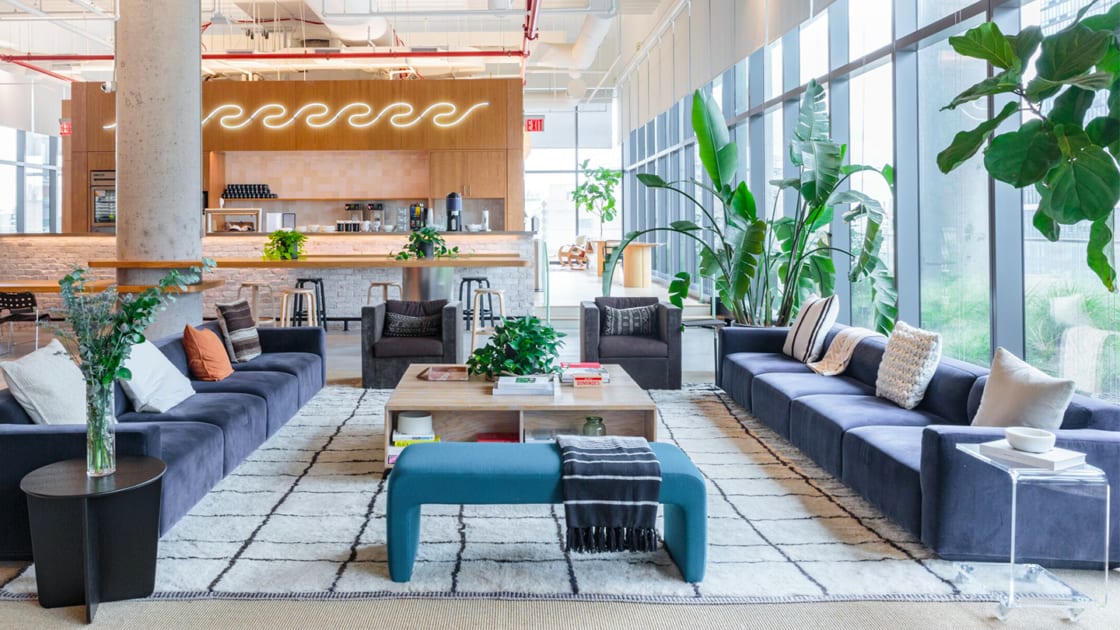 Six enterprise companies that are reinventing the office

In the wake of a global pandemic, four new real estate strategies have emerged