A rideshare service for you and your pet

Aparna Srinivasan wanted an easier way to travel by car with her 50-pound dog. So she created SpotOn

Startup founders have infamously unpredictable daily schedules as they work to establish and grow their businesses. What does such an entrepreneur’s weekly, daily, or even hourly routine look like when sometimes there aren’t enough hours in a day? In the Startup Diaries, founders walk us through a week in their lives and show what it really takes to get a fledgling business off the ground.

If you were to ask Aparna Srinivasan about her role as CEO of SpotOn, her pet-friendly rideshare app, she might refer you to her 13-year-old Lab Pei, Krishna. “I’m doing SpotOn for him, so he’s taken the title [of CEO],” she says. “I’m just the mouthpiece.”

She came up with the business idea in 2016, while living in Los Angeles with her two dogs, Krishna—who weighs 50 pounds—and Raja (who has since passed). “I had cars,” she says. “But there were times that I didn’t want to drive or needed to go to the airport [with one or both dogs], and it just got to be a hassle.” (Uber and Lyft drivers allow pets only at their discretion.) So Srinivasan started feeling out other pet owners to see if they shared her struggle. “They said the same thing,” she remembers. “It’s stressful.”

Their consensus was proof that she was on to something. Over the next year, she kept her day job—running a marketing company—while launching her new business. She built a website with her eventual cofounder and CTO, John Bentley II, and started handing out flyers at dog parks. “My friends and I took over 500 rides in two months,” she says. The trips were free (SpotOn wasn’t licensed so Srinivasan couldn’t charge), but the intel was priceless.

By mid-2017, armed with consistent feedback that New York was a more obvious fit for the service, Srinivasan started considering a move to the East Coast; she did her own research, and by the end of that year she was a resident of New Jersey. “I’ll still be walking along the Hudson River and I’m like, Holy crap. I have a rideshare company across the river,” she says. “It makes me cry. Like, What am I doing? It’s insane!”

Although the app, which officially launched in September 2018, doesn’t offer on-demand service yet (you need to book a driver about two hours in advance), Srinivasan, a member of WeWork Labs at WeWork 81 Prospect St in Brooklyn, expects to accommodate users accordingly by the end of the year, while simultaneously growing her business partnerships. Below, she recaps a recent workweek.

6 a.m. Wake up after getting to bed at 2 a.m. (I was up late prepping for a big investor meeting on Wednesday.) In general, I don’t sleep much. There’s just not enough time during the workday.

6:10 a.m. Shower and pray. Eat breakfast while answering emails, and make eggs for Krishna, my CEO.

8 a.m. CEO finally wakes up. Time for his walk along the Hudson River. (We live in Jersey City.) This is my chance to clear my head.

9 a.m. Off to our office in Dumbo. I listen to music on my commute. I was a deejay in college, and music has always been an integral part of my life. I’ll listen to country, rap, traditional Indian music, classical—but my favorite is house music. It’s a de-stressor.

10:15 a.m. WeWork Labs weekly standup. Members gather to share business updates and present an “ask.” Our ask: Tell your friends about SpotOn, and if you know any investors, send them our way. We’re in our first official fundraising round. It’s so hard! It’s one of the most difficult and time-consuming things a founder will ever do.

3 p.m. Call with advisor regarding a meeting with investors. The be-all of fundraising is persistence… but you need to be persistent without being a pest. As a founder, you’re like, “I need the money. I need it now. Let’s do it.” But that can really drive off investors if you’re looking needy.

4 p.m. Call with my cofounder, John, who built the app. He’s based in Cincinnati, and I would say he’s my first investor. He didn’t put any money into the business, but his sweat, blood, and tears—that’s the investment that’s gotten us this far.

9:15 p.m. Take a break and catch up on Netflix. (Currently watching Arrow.)

10:15 a.m. Drive to my second office space in Newark. There’s a ton of traffic so I’m running late.

3:30 p.m. Meeting with a friend and mentor, Tom Wisniewski. He gave me the push to focus on business partnerships. So, for example, we have a partnership with Passport Unlimited. They handle employee perks for about 700 companies, including Google, Apple, and Microsoft—and employees based in New York get a SpotOn discount code. Eventually, we want to get companies to make SpotOn rides a benefit, like a free lunch, rather than a perk.

8 p.m. Dinner. Totally checking out of work ahead of tomorrow’s big meeting. I’m going to pitch the investors in a SpotOn with Krishna. At first, I hadn’t been taking him to any of our pitches, but then I had a pitch competition at Voyager HQ and I decided to bring him, and the pitch went so well. After that, I scheduled my first SpotOn ride with investors, and by the end they were taking selfies with Krishna.

7 a.m. Eat breakfast, then wake up and feed CEO.

8:15 a.m. Morning walk through the nearby marsh. We do some bird watching.

9:50 a.m. Get to office and catch up with a fellow Labs member who has an investor lead for me.

12 p.m. Walk over to Brooklyn Bridge Park for the shoot.

2:45 p.m. Big investor meeting in a SpotOn. I want them to see the bigger picture—that we’re not just a rideshare, but a bridge to getting your dog to all these different, interactive offerings. I frame it as “experience N.Y.C. through the eyes of a dog.”

3:20 p.m. First stop is Dogville, a pop-up where dogs can enjoy various activities. Krishna talks to the CEO of Dogville—they have their own little meeting, smelling the butts. Very important.

4:10 p.m. Stop at Hotel 50 Bowery, a pet-friendly boutique hotel with a rooftop bar. These are the kinds of things that people will do with their animals, given the opportunity.

5:45 p.m. Part ways. Honestly, we’re too early for these investors, but they’re going to help us with potential strategic partners.

6 p.m. Meet with The Fourth Floor, the women-centric networking organization I recently cofounded, at the office.

2 p.m. Call with major pet brand about our upcoming pilot. Pet retailers are starting to take a more service-oriented approach, incorporating more events, training, daycare, and boarding into their existing retail facilities. We’re going to be the transportation arm: You book your training appointment online, and you have an option to request a SpotOn ride.

4 p.m. Call with another investor. Close to a close! Hopefully. One thing about fundraising is, people can say, “I want in.” You get a number from them, you send them all the paperwork. But until that money is in the bank, it’s not closed.

7 p.m. Feed the CEO a hot dog—I didn’t prepare to be at the office this late.

2.30 p.m. Meeting with Contour Ventures, a VC firm. I get amazing advice on what numbers I need to drive home for investors. For example, I shouldn’t say, “65 percent of all our rides are coming from our partnerships”—that means nothing to them. Instead, I need to say something like, “We service six pet-friendly WeWork buildings. We get X amount of rides from them a month, which means X revenue. If we expand to service X WeWork locations, this is our potential revenue.”

4 p.m. Check out of work. I’m meeting at my sister’s house to get ready for a family wedding this weekend.

The truth is, I will work this weekend—I work at least a little bit every weekend. I’m very driven, and I think most founders are, because if you’re not driven you’re not going to be able to succeed. But, lately, I’m making sure that I do take a break from work. My hand will still be on my phone. But I don’t necessarily have to be in front of my computer developing the company. If you’re always focused on this one thing, you won’t have a sound mind.

FILED UNDER
MEMBER SPOTLIGHT STARTUP DIARIES SMALL BUSINESSES
Interested in workspace? Get in touch.
TRENDING NOW
01 A catering platform connects restaurants with those in need 02 What’s the right way to give feedback over video chat? 03 How China’s return to work informs new workspaces 04 U.S. real estate in economic dips: looking back and forward 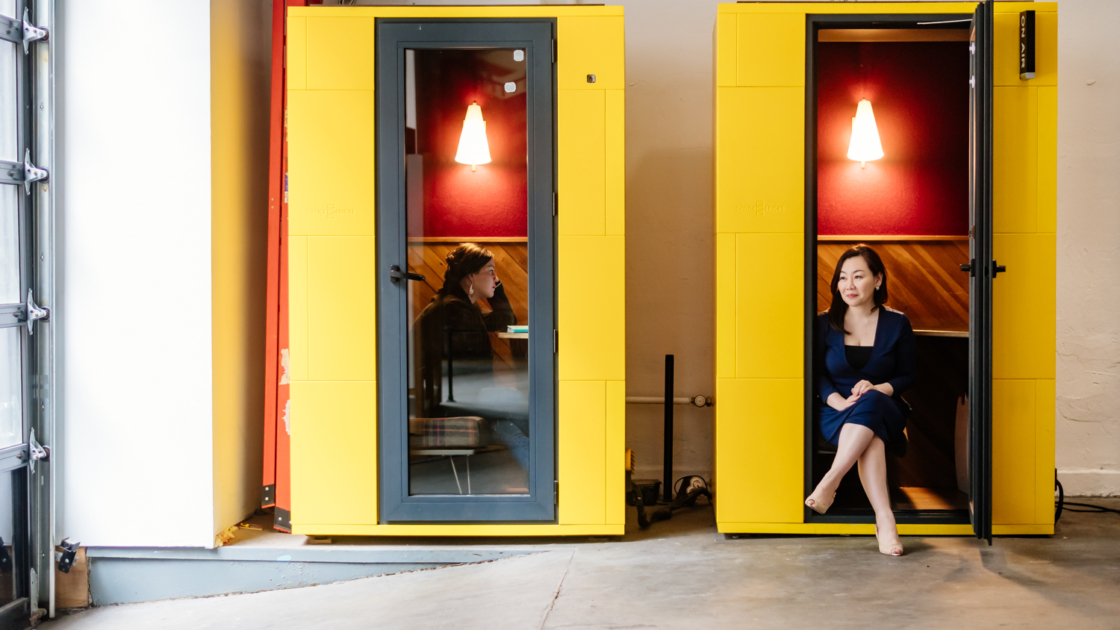 A childcare service with an educational twist