One of the biggest challenges in bringing employees back to the office is figuring out how to get them there in the safest way possible. Large corporations have recognized the need to give their employees the ability to work from some physical location—either a central office or a distributed location close to where employees live. But that means employees will still need to commute one way or another.

In a recent webinar hosted by WeWork, I sat down with three experts from different aspects of mobility to discuss the best ways to get employees back to the office safely. The panelists included representatives from Scoop Technologies, the largest carpooling platform in the United States; Swiftly, a mobility operating system that empowers public transit agencies and provides users with real-time data; and Commutifi, which offers insights on commuting behavior in order to recommend the most convenient and efficient office locations for companies.

We spoke about new commuting strategies, the future of flexible working, as well as the role that employers play in offering safe commuting options as we move forward in a COVID-19 world. We even imagined whether this could be the chance to transition away from our reliance on cars and see a bigger shift toward biking.

Here are some of the innovative solutions that emerged from the discussion.

“Cities in general are undergoing five to 10 years of digital transformation in five to 10 weeks,” says Jonny Simkin, CEO of Swiftly. “We have to look at data at scale to make very rapid decisions that have profound implications on the commute today and the commute tomorrow,” he says.

Although ridership has fallen due to COVID-19, many public transit systems across the U.S. have reduced their underutilized routes and added higher frequency on the most popular routes to make sure people can space themselves appropriately in those vehicles. Some are even providing riders real-time information on utilization so they know how much available space there is, and when it might be safest to take public transportation.

While this is positive, there’s still a tremendous amount of concern about taking public transit, Simkin says, despite the safety measures that public transportation systems have put in place, like mandating face coverings, drivers wearing face shields, rear door boarding, and increased cleaning protocols. He attributes some of the fear to speculation that New York City subway commutes may have helped fuel the spread of COVID-19 in the early days, even though subsequent studies found that to be untrue.

Nevertheless, some people returning to work may prefer to drive themselves for a while, but that model can’t be sustained over the long term if everyone shifts to driving, says Simkin. “The only way to move the sheer volume of people during commuting hours is having more than one person per vehicle, which by definition might put you in jeopardy from a health and safety perspective,” he says. “As long as people need to commute to work, there will need to be higher vehicle occupancy rates.”

Employees are looking to their organization’s leaders for guidance and actionable plans for their commute. This highlights how important it is for enterprises to be treating this as a priority. One way to reduce the reliance on public transportation is to shorten the time spent on it. To make that happen, companies would have to find solutions that allow workers to report to locations closer to their homes.

Commutifi, a data company that creates programs in the commuter space for employees and companies, has found that 70 percent of employees would prefer to be within a 15-minute commuting distance of their workplaces. “When people are ready to return to work, single occupancy riders [in cars] are going to increase up to 35 percent. One of the biggest challenges is how do we prepare for this 35 percent surge?” says Josh Jacobsen, Commutifi’s vice president of business development and another panelist I spoke with. That’s an increase in parking space demand, for starters, not to mention a return to congestion and traffic.

The solution? Shorter commutes, says Jacobsen. “The more you compress that commute time, the more you open up the door for multimode commute options,” says Jacobsen. You might then have more people walking, biking, or riding electric scooters.

During this period of transition—when employees may be eager to go back to the office but are unwilling to take public transportation or are unable to afford ridesharing or purchasing a vehicle—we believe micro-mobility will serve as a key driver of the return to the workspace.

Enterprises can also partner with WeWork to offer locations closer to where their employees live. Research has shown that 96 percent of office workers in Manhattan (and more than 58 percent of those who live throughout New York City) live within a 15-minute bike ride or are walking distance from a WeWork location.

The first step is for businesses to figure out which clusters of their workforce live near one another, and then have them report to an office closer to their homes. To take things a step further, businesses can then also organize a way for employees to commute together, which builds stronger ties and a sense of community among employees.

When discussions to bring employees back to the workplace begin, it starts with the commute, says Cynthia Taylor, vice president of customer success for Scoop, an app that offers managed carpool programs for employers and carpooling for individuals.

“Employees start thinking about returning to the workplace the minute they step out their door and what that looks like,” she says. “Employers need to make options available, with the choices focused around health and safety.”

So if public transportation is deemed too risky for some, but driving in solo also isn’t feasible, the solution could be commuting with a small group. “If people are willing to work in the same office, they should have no problem commuting together with the same colleagues,” says Taylor.

The challenge is that it’s very likely that not everyone will be reporting to work from nine-to-five every day. “Because we have so many changes in the way people will be working [e.g., different days, staggered shifts, working from home],” says Taylor, “you have to have something that’s scalable based on the number of commuters you have on any one day, and that’s flexible on pricing to ensure you are using your budget appropriately.”

Despite the learning curve, there is also an opportunity for the commute to support employers. Scoop has been working with employers to get on the same page with the safety protocols they are requiring, from checking symptoms to reminders about mask-wearing. They are also working on educating employees about these policies. That way, if an employee is matched with coworkers who are educated on the same platform and understand the requirements for personal protective equipment (PPE), they will be more willing to commute together in a carpool.

Getting to work safely

“At the end of the day, as employers reopen offices, they will need a safe way [for their employees] to get to work,” says Simkin. “As cities think about closed streets and electric scooters and carpooling, the trend will vary by city, but everything around creating safe ways for people to share rides to work will become more important in this world.”

Due to the pandemic, there will be more micro-mobility choices as well as more options to work in locations closer to home. Carpooling, ridesharing, and car ownership will rise, and the use of public transportation will likely bounce back, but in a slightly reimagined way.

The game changer will be whether employers can find ways to shorten commute times and expand options by providing employees workspaces near their homes. This will also solve the challenge of de-densifying and reducing office capacity requirements overall. That can be a win-win for public health and employee safety and will give people the additional flexibility that so many have begun to appreciate, especially during this time of general uncertainty.

Alex Shoer is the director of strategy at WeWork and the former enterprise strategy head for APAC at WeWork. Prior to WeWork, Shoer cofounded Seeder Energy, which specializes in green building, renewable energy, and energy efficiency for commercial and industrial buildings. He is actively thinking about the future of cities, mobility, and how to build strong communities.

FILED UNDER
FLEXIBILITY SATELLITE OFFICE HEALTH AND SAFETY
Interested in workspace? Get in touch.
TRENDING NOW
01 How to prioritize tasks when everything’s important 02 Why I don’t work from home even though I could 03 The next year will cement new trends in how we work 04 How Asahi Beverages cultivated one culture under one roof 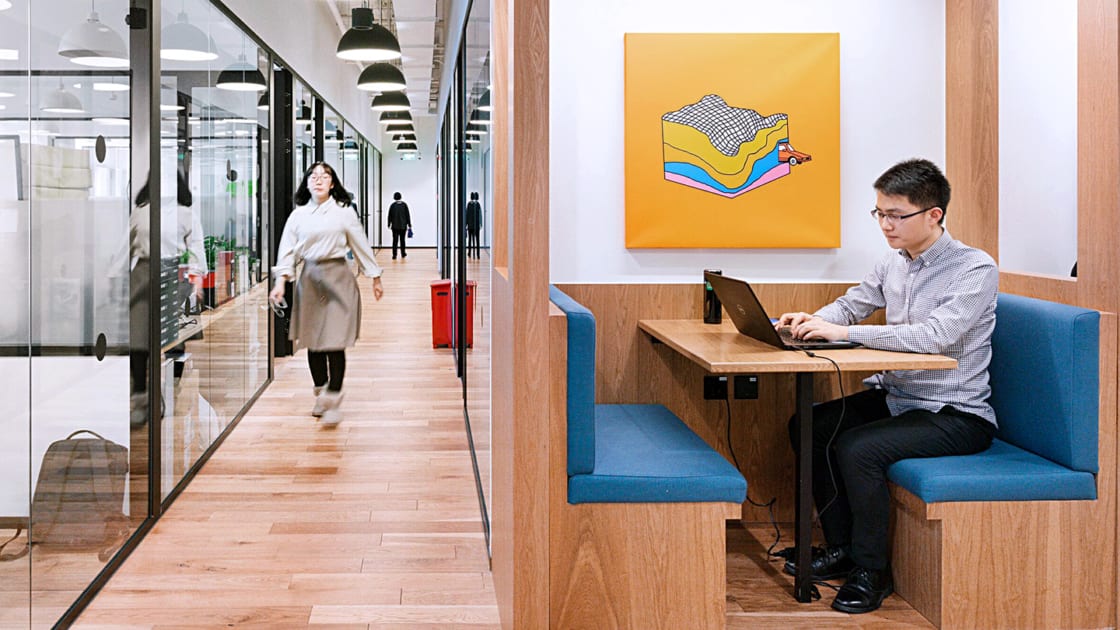