Make your return to the office easier—get 25% off a WeWork All Access membership for the first 3 months. Terms apply. Learn More
EXPERT INSIGHTS
Erik Weihenmayer
November 2, 2020

I talk a lot about the idea of a “No Barriers” life. As a blind man who has successfully climbed Mount Everest and kayaked the Grand Canyon after six years of preparation, it’s an important concept to me. I think about the idea of No Barriers in terms of a journey: It’s that unexplored terrain between base camp and the summit—i.e., the safe places where we rest, rejuvenate, and strategize about our ambitions. What does that look like? It’s the idea that this journey of life is a map that we are all trying to build and navigate.

I try to help others understand what that “No Barriers” map looks like for them. For most, it is not about climbing mountains or kayaking rivers, but it is deeply personal for every person. It is a learning process. It is a process of learning and discovery to understand these elements, the waypoints along the way. Those elements are like holds on a rock face that lead you upward and give you clues to where you’re going and why it’s so important to try to get there.

A map to your personal summit is only part of achieving success. Technology is an amazing tool, but that’s not a secret weapon for success. And it’s not a pile of money, either—money is important and great, but it’s not necessarily the secret weapon. That would be the people with whom we surround ourselves.

A blind guy doesn’t climb mountains alone. I do it with a great team. Take Everest, for example. Reaching the summit was a historic accomplishment, but the thing I’m most proud of is that 19 people on our team reached the summit that day—a world record. I was, and still am, very strategic about which people’s hands I choose to put my life in, because their lives were also in my hands. If there’s been a secret weapon to my success, it’s “roping up” with these incredible people.

What I love about climbing is that “roping up” is not simply a metaphor. If someone falls down the mountain into a crevasse, they’ll drag you down with them. So you throw yourself down, and dig your ice axe into the snow and ice, the rope gets taut, and you stop them from falling to their death or serious injury. It’s a terrifying way to travel! But it is important to think of how our team, those we are roped together with, have such a powerful effect on whether or not we reach the summit.

When I went blind, my greatest fear was not darkness—it was being swept to the sidelines, a life lived for nothing. We all want to feel connected, to be a part of something bigger than ourselves. That’s where we begin to learn and grow and trust and rely on one another, tapping into one another’s expertise, talents, insights, and diversity. In this place, we can respect everyone’s opinions and move forward, knowing that even though you might have different motivations, opinions on the world, and different jobs to do, you’re on one rope team, heading toward one summit, and you’re connected by a unifying vision. Maybe where you want to go is different, but the importance of getting there is the same.

In my second book, The Adversity Advantage, I teamed up with researcher Dr. Paul Stoltz, and we concluded that people fall into one of three categories: Quitters, Campers, and Climbers. Quitters are self-explanatory, but Campers are a fascinating group, one which many of us fall into. Maybe the burdens and barriers become overwhelming or clouded by fear and doubt, and we wonder if we’ve climbed as high as we can, so we camp and stagnate. The tragedy is that all that talent, all that potential, is lost to the world. Climbers are a rare group. So the question is, how do we continue to climb despite so much uncertainty and challenges in the world?

I’ve had the honor of working with people who’ve faced all kinds of challenges—youth, people with disabilities, caregivers, veterans, people who have dealt with violence, drug abuse, and post-traumatic stress disorder (PTSD). I’ve watched these people struggle, for sure, but I have also seen the power of keeping an open heart and open mind. They look for those elements on the map that tell them they are heading in the right direction. There may be shortfalls and stopping points, but when they look up at some point, they realize how far they’ve come.

You can use challenges and setbacks as energy—adversity as fuel—a way to propel you forward to a place you may never have gone to any other way. A friend of mine, Dr. Hugh Herr, was a brilliant phenom of a climber as a teenager. One afternoon, he pushed way too hard in a storm on Mount Washington. He got lost and his legs froze and had to be amputated.

He later told me about the greatest breakthrough of his life: When recovering in the hospital, he looked down at where his legs were supposed to be, and instead of seeing loss, what he saw was a blank canvas. He realized he was the inventor—he could build in that space anything his mind could conceive. That space was fear, but his loss didn’t turn into a vacuum—it transformed into the seeds of creation. He still wanted to climb, so he started tinkering and iterating in his garage. He built extendable legs and tiny doorstop-shaped feet that he could wedge into cracks in the rock that no human foot could even stand up in. He became a better climber than when he had legs. He went back to school, got a Ph.D. in engineering, and now runs the biomechatronics lab at MIT. He’s doing incredible work, building the most sophisticated prosthetic legs in the world.

You can take crappy things and turn them into beautiful things, like innovation and discovery and rope teams, relationships that last a lifetime, and maybe a paradigm shift that the whole world follows. It’s important to go through the process of learning and failing, figuring things out and building the right group of people around you. There will be fear and disappointment, even failure. But armed with the right mindset, over time that fear gets pushed back to the periphery of your consciousness. What comes to the center is focus, love, appreciation, respect, and beauty. And you don’t simply survive—you flourish.

Erik Weihenmayer is one of the most celebrated and accomplished athletes in the world. In 2001, he became the only blind person in history to climb Mount Everest. When he stood on the top of Carstensz Pyramid in 2008, he completed his quest to climb the Seven Summits, the tallest peaks on each of the seven continents. Weihenmayer is the author of the bestselling memoir Touch the Top of the World, which was made into a feature film, as well as The Adversity Advantage. His latest book, No Barriers: A Blind Man’s Journey to Kayak the Grand Canyon, illuminates how we move forward in our lives toward growth and purpose despite the barriers. In September 2014, Weihenmayer and blinded Navy veteran Lonnie Bedwell kayaked the entire 277 miles of the Grand Canyon on the Colorado River, considered one of the most formidable whitewater venues in the world. Weihenmayer continually seeks out new adventures, focusing his efforts on empowering people traditionally swept to the sidelines of life. He founded the organization No Barriers, which helps people with challenges tap into the human spirit, break through barriers, and contribute to the world.

FILED UNDER
CREATIVITY CULTURE TALENT AND RETENTION
Interested in workspace? Get in touch. 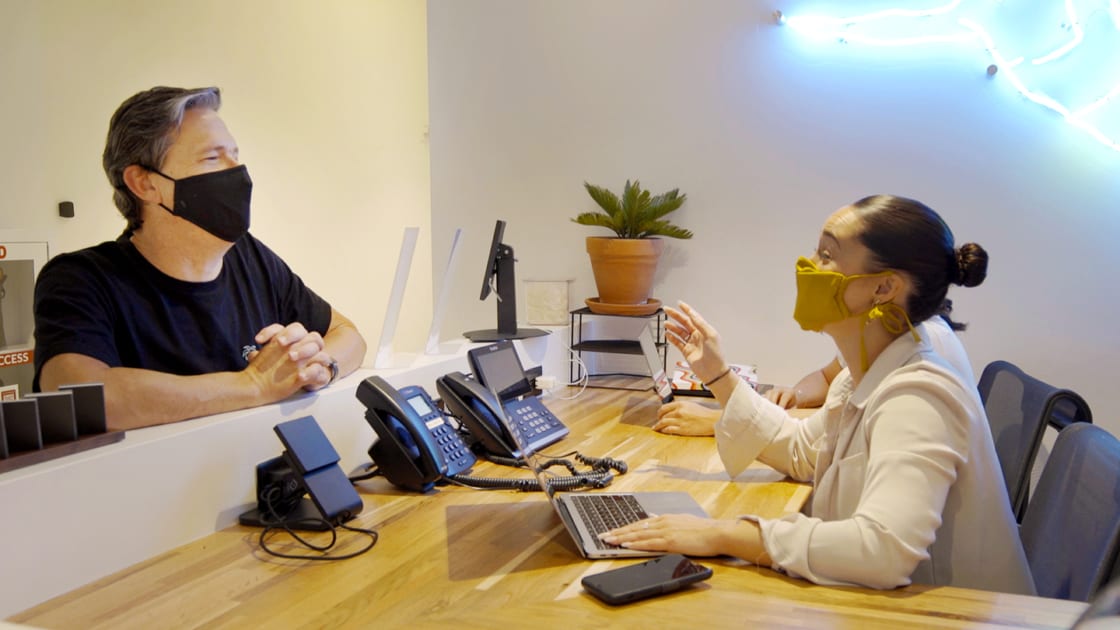