Make your return to the office easier—get 25% off a WeWork All Access membership for the first 3 months. Terms apply. Learn More
MANAGEMENT AND LEADERSHIP
Jo Piazza
May 23, 2019

How to engage remote employees

Slack and video chat go only so far. Here’s how to make remote workers feel like part of the team

MANAGEMENT AND LEADERSHIP
Jo Piazza
May 23, 2019

Most of us spend the majority of our waking hours at work. That means we invest most of our time in work relationships: figuring out how to best communicate and collaborate, how to succeed, and how to recover from failure. Work With Me is a deep dive into those dynamics.

When Emily Azrael started as the director of ad sales and brand solutions for content creation company Soul Pancake, she was the only team member in New York City. Everyone else was in Los Angeles. “I come from a background of really close-knit work relationships,” says Azrael, a member at WeWork 134 N 4th St in Brooklyn. “It took me a year to adjust to the long-distance lifestyle.”

At first Azrael did a lot of phone calls with her colleagues. But Soul Pancake didn’t have the equipment for video chatting yet, and the calls left Azrael feeling increasingly isolated. “I’m someone who really likes being around people,” she says. “I like making them laugh, and jokes don’t land on Slack.”

Without a video connection, Azrael felt like she was speaking to an empty room. She had no idea who was even paying attention. Once her company found a way for regular video conferencing, that small change made all the difference.

“Being able to see the nonverbal cues helped a lot—just to be able to see people smiling and to join in on the small talk at the beginning of the call,” Azrael says. “When people can see your face, they ask you more personal questions. Now I feel invigorated after meetings, and I remember why I was so excited to work at Soul Pancake in the first place.”

Video chatting can help bring a remote team closer together, but just turning on the video isn’t always enough, according to Lakshmi Rengarajan, WeWork’s director of workplace connection. The problem, she says, is that we still don’t have the manners for technology that we do in real life.

“It’s important to make sure people are making eye contact with the person on the screen and to position all participants so they feel they have a seat at the table,” Rengarajan says. One of the ways Rengarajan advises teams to do so is to assign each remote person a buddy in the room—an advocate of sorts who’s making sure all your technology is OK, and who can raise their hand for you if necessary.

Garrett Bredenkamp, the CEO of Kombrewcha, has teams at WeWork 134 N 4th St and WeWork 109 S 5th St in Brooklyn and at WeWork Power and Light Building in Portland, Oregon. The kombucha company does use video technology, but Bredenkamp says he gets more done with face-to-face interactions. That’s why he splits his time between the two coasts.

“The magic happens when you’re together in person,” Bredenkamp says. “My personal philosophy is that there’s nothing that being together can’t fix. But we struggle with that because it’s expensive to fly back and forth.”

To maximize your in-person investment, Rengarajan recommends making the most of every minute a long-distance team can physically be in the same space.

“Do something other than drinks,” Rengarajan says. “It isn’t bad, exactly, but it’s worth finding other ways to make the most of a person’s time in a physical space. Go for a walk. Eat a meal together in the office.”

If a meeting does involve a meal, Rengarajan suggests making it one that encourages meaningful conversation and connections. When she hosts remote teams in her own office, Rengarajan has done something she calls a “feast of favorites,” where she orders a selection of each person’s favorite food.

“I ask them, ‘What’s a food that makes you smile?’ or ‘What’s something that evokes your family history?’ It’s when you get into those specificity of preferences that you bring out the stories about someone and create connections,” Rengarajan says. “Relationships are formed through those little meaningful moments.”

Beyond relationship-building, long-distance teams also need to make sure the basics are covered: mainly that everyone is happy and getting their work done. For example, business travel tech company TripActions leverages multiple WeWork locations, where local teams can work together in person and maximize productivity. “We actually found that the people who were coming into an office were 46 percent more productive, in terms of hitting their quotas, than people working out of home offices,” says TripActions’ chief revenue officer, Rich Liu. “I’m a huge believer that when we can, we need to provide our employees that community.”

A time change is often one of the most difficult things to navigate. Teams on the East Coast often get antsy for the West Coast to respond in the morning, while West Coast teams can feel attacked by their inbox when they wake up to 100 messages. At Kombrewcha, Bredenkamp has tried to instill company values that keep these kinds of grudges to a minimum.

“The time difference is annoying, and we have to be cognizant of it. Naturally the New York team ends work a little later, and the West Coast team starts work a little earlier,” Bredenkamp says. “But we have an expectation of each other where we are honest about schedules, and we try to create a culture of respecting other people’s off-hours.”

But no matter how carefully you plan, grudges are sure to arise when people aren’t face-to-face. It’s hard to interpret tone on text, email, or Slack, or tell if an eye roll on a video conference is actually a twitch. And complaints can feel much heavier and more consequential over an email.

“I tell people they need to make sure they’re identifying the right emotion in their coworker,” Rengarajan says. “What could look like complaining could be someone just processing.”

Rengarajan recommends making sure that long-distance colleagues have plenty of neutralizing interactions—one where nothing is at stake professionally.

Create spaces for meaningful conversations about something other than work. Start long-distance book, current events, or podcast clubs that can meet via video chat or even Slack to get remote teams conversing on topics that have nothing to do with work. “We often feel like we always have to be connecting on a professional level,” Rengarajan says. “What we really need is a stimulus that evokes people’s personalities.”

Replicate in-person spontaneity online. When you’re working in an office with someone, you might ask them to grab a coffee or take a walk. Try to replicate that spontaneity with remote colleagues by seeing if someone is free and wants to have a social chat for 15 minutes.

Make the most of technology. It’s not enough to use video technology. Make sure the technology is positioned in such a way that everyone feels like they’re in the room. “We are quick to adopt new technology, but not as quick to accept what we have lost,” Rengarajan says. “What can be lost, if you’re not careful, is the full and vital participation of a team member.” Keep video meetings small and intimate so people really feel like they have a seat at the table.

FILED UNDER
CREATIVITY CAREER MANAGEMENT
Interested in workspace? Get in touch. 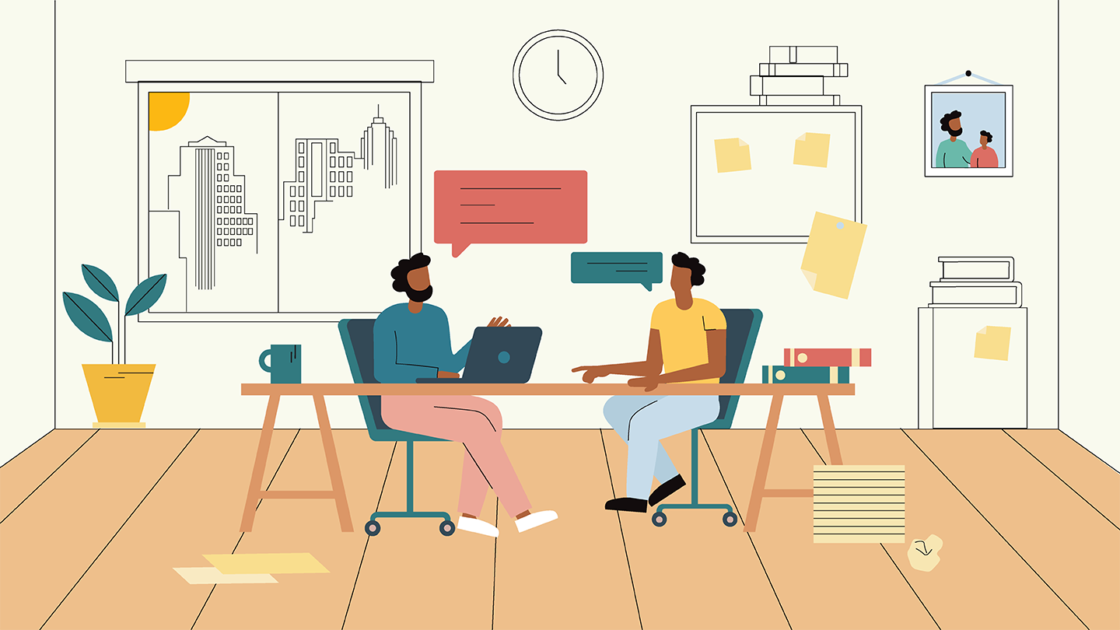 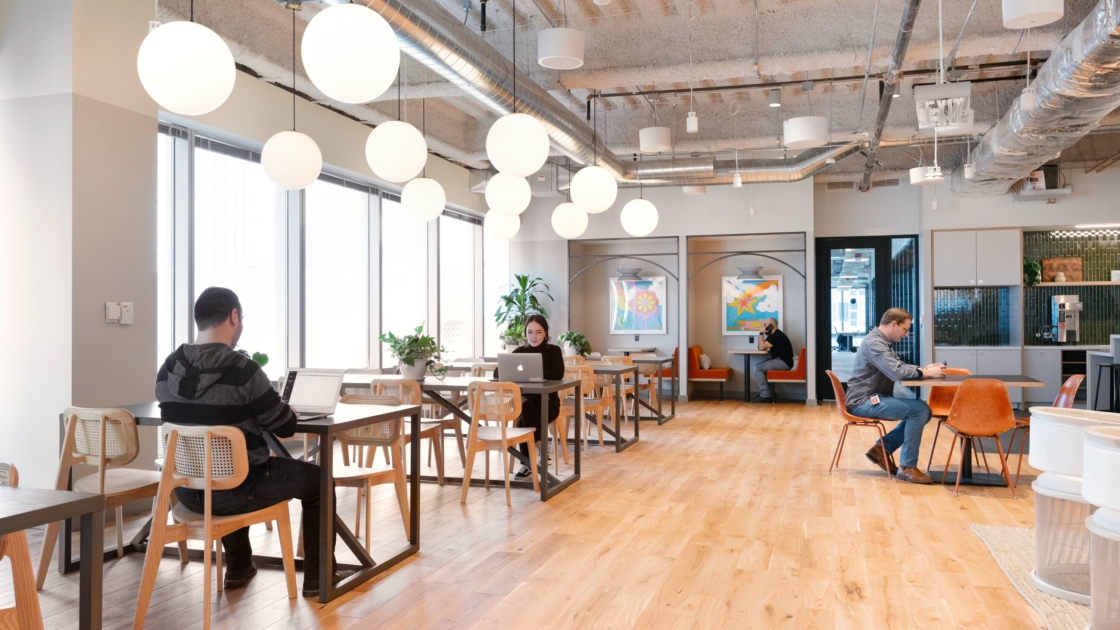