For Kai Jacobs, founder of South Florida Business Law Group, moving into a WeWork space in Coral Gables, Florida, was an experiment. He was used to working in an old-school traditional law office environment, but that felt isolating and competitive—so he was ready for something new. “Lawyers are generally not early adopters of anything,” Jacobs says. “We’re very slow to change.”

The business litigator was one of the first tenants to move into WeWork 2222 Ponce De Leon Blvd when it opened in 2017—he signed up to be a member shortly after he saw the space during a hard-hat tour. The space was appealing, but what really sealed the deal for him was the WeWork philosophy.

“Other coworking spaces didn’t have the ideas WeWork did: community and networking,” he says. “It didn’t take me very long to figure out that I would sign that lease.”

It didn’t take him long to start making connections after he moved in, either. He developed a rapport with the location’s community managers and began forming bonds with fellow members he’d exchange hellos with in the hallways. Those personal bonds led to business relationships, as well.

There was Bailey, the digital marketer whose outgoing personality made her a fixture in the building. “She makes a point of meeting everybody,” says Jacobs. “I became a sort of general counsel for [Bailey’s marketing firm]. If they needed something reviewed, I’d take a look at it for them.”

There was Manny, who runs a translation business and was a pro at connecting members. “Every time we’d go around the building, Manny would go, ‘You need to meet Kai—he’s our resident lawyer. You should talk to him,’” says Jacobs. “Manny tells us all who to talk to, and keeps us on the straight and narrow around here.”

There was Giancarlo, whom Jacobs was referred to when he needed help with his financial recordkeeping and had no idea where to start looking for a bookkeeper. “Anytime you ask for help at WeWork, somebody is listening,” says Jacobs. “A fellow member said, ‘Hey, you should talk to Giancarlo.’ I met him and thought—how have I not known you before? And I ended up hiring him.”

Once the pandemic hit earlier this year, Jacobs was discouraged at the prospect of working in isolation. “I’ve had so many experts tell me that my business will thrive on patting backs, shaking hands—getting to know people one-on-one,” he says. “And then in March, when things went sideways, it was, ‘Don’t touch people, don’t pat backs, and definitely don’t shake hands.’ I needed to figure something else out, so I immediately contacted Bailey.”

Jacobs was heartened to find that the close-knit network of WeWork members he’d joined easily withstood the challenges of social distancing. Bailey and her colleagues at the marketing firm advised Jacobs on social media strategy, developed a remote marketing calendar for him, and set him up with a weekly webinar series.

“They were right on it,” says Jacobs. “And she’s still helping me—tomorrow she’s coming by to make sure we get the next webinar up and running.”

In July, when Jacobs stopped into the WeWork office to pick up his mail, a chain reaction of community action came into play. In the mailroom, Jacobs ran into Manny, who mentioned a colleague in need of legal advice. Jacobs came to the rescue. Manny’s colleague was so thrilled with Jacobs’ work that he immediately connected Jacobs with a friend—a nutritional health expert who also needed legal advice.

As an entrepreneur, the health expert also needed help with many other areas of her burgeoning business. “She said, ‘You know, I hate my digital marketing,’” says Jacobs. “And I said, ‘You need to talk to Bailey.’ Then she’s sitting there with a pile of bank statements, so I said, ‘You need to talk to Giancarlo.’” He was able to refer WeWork members for just about every problem on her plate. “I find that if you stick around WeWork long enough, you can take care of most of your business needs in-house,” says Jacobs.

For Jacobs, that interconnectivity is not just a convenience, it’s an ethos. “It’s a WeWorkers for WeWorkers sort of movement,” he says. And it was that emphasis on connection that made Jacobs’ recent transition back to his WeWork office that much more rewarding. After a few months working mainly from home, Jacobs has started moving closer toward his pre-pandemic office routine—and it’s a welcome return.

“Even if things aren’t exactly the way they were, it’s nice to hear people talking in the hallway again,” he says. “It’s nice to go downstairs and see faces. Before, I’d run into people, but now it’s a lot more intentional. People who are coming in are saying, ‘I need to make a human connection—to see and talk to another human being.’ People around here like to stick together.”

FILED UNDER
COMMUNITY COWORKING CULTURE
Interested in workspace? Get in touch.
TRENDING NOW
01 How to prioritize tasks when everything’s important 02 Why I don’t work from home even though I could 03 The next year will cement new trends in how we work 04 How Asahi Beverages cultivated one culture under one roof
Was this article useful? 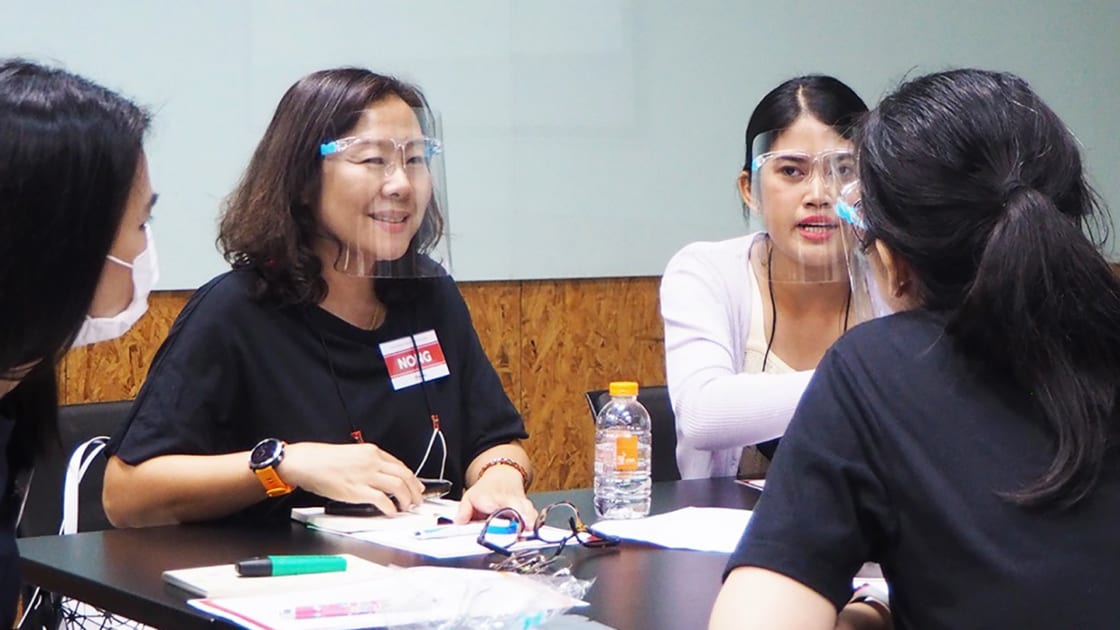 A de-densified space gives a learning platform room to grow