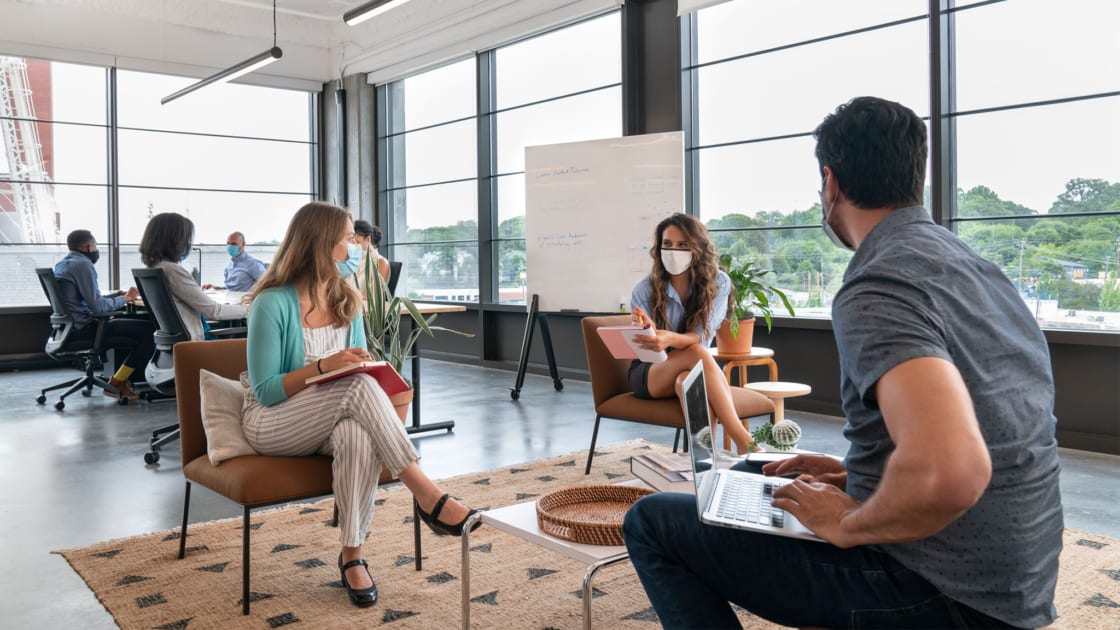 Click here to see what makes employees more satisfied and productive when they return to the office.

Studies show that after working from home during the COVID-19 pandemic, employees overwhelmingly want to go back to the office – at least one day a week. With positive vaccine trials increasing the chance that there will soon be a viable vaccine, businesses now have an opportunity to plan for the future by considering what a flexible back-to-the-office plan could look like. They can learn from the experiences of those who had the opportunity to return to the workplace in the autumn in order to devise an effective strategy.

For business leaders, the most crucial factor for success in bringing people back to the workplace is instilling confidence in their employees and gaining their acceptance. But what makes an employee feel safe and productive when they return to the office? This study examines the policies and conditions that impact an employee’s performance after returning to the workplace, and highlights the strongest approaches businesses can take in making the return a success.

Another wave of COVID-19 has forced many employees worldwide back to working from home. For businesses, understanding and applying the best policies for their eventual return to the workplace will ensure improved employee performance and business success. The findings from this survey can help businesses plan in advance so that they can be prepared for the future, especially once vaccines are widely distributed.

In October 2020, WeWork, in partnership with brightspot strategy, a research and strategy company, conducted a blind survey that was representative of professional office employees across the US, Canada, Mexico and Western Europe to determine the conditions that made employees more satisfied and productive when they returned to the office after working from home. It was designed as a blind survey, with no reference to WeWork or assessment of co-working.

An employee’s ability to work productively, achieve personal satisfaction, and view their company positively are critical to business success. Individuals who are not engaged in their work have 37 per cent higher absenteeism and 18 per cent lower productivity. Teams that are unable to collaborate or communicate effectively result in negative interpersonal interactions, drop in innovation, and consequent revenue and profit losses. A workplace with unengaged employees, poor teamwork and communication challenges leads to a toxic culture that impacts employers through high staff turnover – an estimated $223 billion over the last five years for US companies.

This study assessed the impact of company policies and conditions on the self-reported performance of employees as they returned to the office compared to working from home. Across the four metrics evaluated, employees said they had an overall boost in performance since returning to the office. (See the full report for more detail on how individuals rated their abilities within each metric):

While all four metrics improved on average since returning to the work environment, some conditions had a larger impact on performance.

Employees who felt that the transition back to the office was smooth and carefully planned out reported a 7 per cent improvement in collaborative productivity and a 12 per cent improvement in their experience of company culture. Those who judged their company’s handling ineffective saw a 4 per cent drop in performance for both collaborative productivity and company culture.

A poor return to work experience was described by one employee as: ‘bloody mindedness on the part of management, many of whom are still working from home themselves.’

An additional factor affecting employee’s reported performance was the initial company response to the pandemic back in the spring. Poor perception of a company’s efforts to transition employees to work from home at the onset of COVID-19 engendered ‘distrust’ against future attempts to reopen the workplace.

Perceived safety of the workplace

While acknowledging that complying with COVID-19 protocols in the office can be difficult and time-consuming, employees expressed how the systems in place to protect them had an overall positive effect. ‘Being alert to safety protocols’ was reported as an important feature of returning to a work environment. Conversely, employees who felt unsafe reported additional stress that negatively affected their performance.

A company providing PPE and hand sanitiser had the most positive impact on self-reported employee performance among all the safety precautions – an 11 per cent increase in their experience of company culture.

Amount of time together in person

Employees felt ‘energised’ and ‘refreshed’ as key benefits of returning to the office. They said the ability to communicate successfully was critical. Conversely, staggered returns contributed to communication and productivity challenges. ‘Everyone is not present on-site continuously, so there are still communication problems,’ said one respondent. ‘Not everyone is there because we rotate. So sometimes we have to wait a few days for something,’ said another.

Amenities in the office

The most important features provided in the workplace, as identified by employees, included having a dedicated workspace and access to technology. Employees with access to a dedicated workspace in the office reported a 6 per cent improvement in personal well-being as compared to working from home. At the office, employees said positives include ‘having access to everything I need to work at 100% with clients’ and ‘feeling more productive and motivated’.

Understanding employee workstyles and who is or is not effective working from home can be used as a tool to determine which employees might benefit most from returning to an office. This can be used to establish a community of colleagues who frequently interact or depend on one another for collaborating. Coordinating their schedules will ensure that the right people are together at the right times.

As we look towards the future of work, policies that companies put in place will continue to impact employee success. Continuing to assess, monitor and respond to employee perceptions and preferences as the workplace adjusts to the pandemic will ensure improved employee performance and sustained business success.

Click here to see all the conditions that make for a successful return to the office.

Interested in workspace? Get in touch.
FILED UNDER
PROPERTY STRATEGY HR TALENT AND RETENTION