The secret to evolving Japan’s workstyle

WeWork’s community team members are the soul of the We community. The Heart of We highlights how their hard work and passion improves the daily lives of WeWork members across the globe.

Haruka Shibata was working at Softbank, a large Japanese conglomerate, when she read an article announcing the company’s investment in a new kind of workplace called WeWork. “When I read it,” says Shibata, “I thought: This is everything we need in Japan right now.”

Shibata, 31, says she was drawn to WeWork’s philosophy to “do what you love”; worklife in Japan, she explains, is often missing the social element WeWork promoted. She applied, and in January 2018 was hired as part of the human-resources team at the first WeWork building in Japan, WeWork Ark Hills South, in Tokyo.

Coincidentally, around the same time Shibata joined WeWork in pursuit of a more positive work environment, the Japanese government’s initiative to reform the country’s work culture, called Work Style Reform, was garnering attention. With high suicide rates and Japan’s rigorous work culture taking a toll on health and family life, the country was ready for a change.

“Japan is trying to shift the culture,” says Shibata, explaining that traditionally, working longer hours was what made you a valued employee in Japan. Even with governmental support, however, companies don’t know what to do to change things.

After two weeks at WeWork, Shibata joined the community team. “Working on community [puts me] at the hub of making the culture, of crafting the messages and missions and policies and putting them into effect in the work lives of the people in my building,” says Shibata, who is now a community lead at WeWork Midosuji Frontier in Osaka, and also helped launch a number of WeWork locations in Tokyo and Fukuoka. “It was my dream.”

In one of her first steps toward making the workplace more joyful, Shibata employed a reliable method of bringing people together: an after-work happy hour. No one showed up. “In Japan, happy hour is common, but never at work,” Shibata explains.

For the next event, she set up the drinks area so that it looked photogenic, hoping that would lure attendees. A handful of people came out, took a picture—then immediately went back to their offices.

Still, Shibata persevered, slowly learning how to leverage the community. “These members joined WeWork because they were looking for something,” she remembers telling herself. “I would just have to be more creative in finding ways to help people open up.”

Shibata changed tack, creating an event called, simply: “Exchange Business Cards.” Laughing, she acknowledges this straightforward event would never work in Western culture. However, it was a huge success among the Japanese. “About 50 members came down from their offices, just to exchange business cards!” she says. “All I did was put out orange juice, tea, and a microphone, then said ‘3, 2, 1… go!’”

Little by little, the members in her building started to get to know each other and understand that WeWork is a family of sorts. “They just needed a little help to see that they can build relationships here,” she says. “That work can have a more casual, social side.”

Shibata is euphoric that she was able to contribute to even this small shift in work culture. “We taught our members to enjoy their work life, and it feels amazing!” For as much as she feels she has given to the community, she’s gotten so much back, too. “Though I am trying to make the members happy, it is they who are making me smile,” she says. “I receive a lot of love.”

We spoke to Haruka about her future plans, what she likes about WeWork, and the places and things she loves:

Where she sees herself in five years: “I want to be a female leader,” says Shibata, “a person who can impact people.” She says that a lot of women in Japan haven’t been able to move up because working extra hours has been the key to mobility, and when women have children, that’s a lot harder to do. But things are changing. “I want to create my own team, building, world, culture—a special happy environment,” says Shibata.

Her favorite thing about WeWork: Shibata loves learning new things, and says that she has expanded her knowledge in many areas because of her members. One way she does this is to set up one-on-one sessions to learn more about her members’ businesses. She says a perfect example is the font design company Morisawa. “I was surprised to discover that there is a psychological underpinning to letter design,” she says. “I would never have learned that if I wasn’t at WeWork.”

Favorite pastimes: Shibata finds that hot yoga balances her life. “At WeWork I’m meeting people all day long,” she says. Therefore, on the weekend, she says she most enjoys spending time by herself.

Favorite place in world: Laguna Beach in Southern California. “When I went to college in California, I surfed every morning,” says Shibata, noting she had to give the hobby up when she moved back to Japan because the winters are too cold and in summer the beaches are too crowded. “I miss the chill beach,” she adds.

What she misses about the U.S.: Shibuta says she loved going to American grocery stores like Whole Foods. “There are so many kinds of vegetables and fruits,” says Shibuta, adding that fruit in Japan is very expensive. “For me, Trader Joe’s is heaven. You can find healthy or unhealthy, you have it all.”

FILED UNDER
COMMUNITY CULTURE APAC
Interested in workspace? Get in touch.
TRENDING NOW
01 A catering platform connects restaurants with those in need 02 What’s the right way to give feedback over video chat? 03 How China’s return to work informs new workspaces 04 U.S. real estate in economic dips: looking back and forward 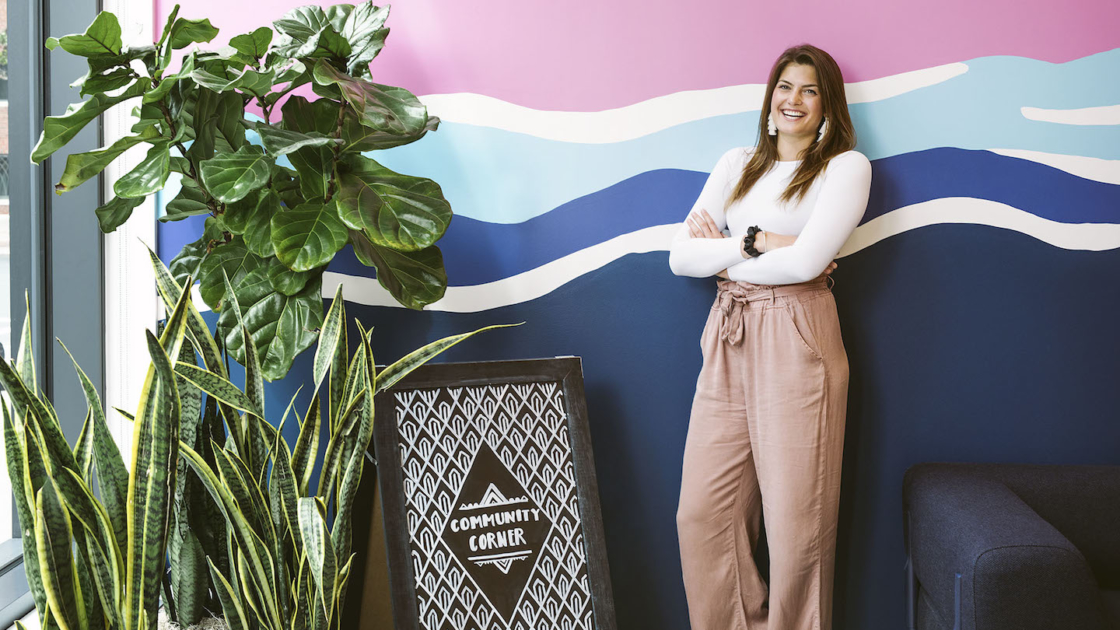