Make your return to the office easier—get 25% off a WeWork All Access membership for the first 3 months. Terms apply. Learn More
MEMBER SPOTLIGHT
Abraham Gross
June 11, 2015

On a bright Sunday afternoon, four 20-somethings carrying a stepladder and some tools walk onto the basketball court at Corporal John A. Seravalli Playground. Ryan Kulp looks at the hoops, rusted, and bare. The kids playing ball look up to him, a little puzzled.

Kulp isn’t employed by the city’s park department. It may come as a surprise, as it does to many of the young basketball enthusiasts who benefit from his work, that the 25-year-old Kulp is the founder of 12 Loops, a campaign to hang 100 new nets in many of New York City’s public basketball courts.

To Kulp, the roots of the project branch back to his childhood in the suburbs of Atlanta.

“There was a basketball court in my neighborhood, and it wasn’t very nice, but my dad would shoot hoop there sometimes with teenagers and college kids,” he recalls. “Constantly, the net was torn down, and my dad made a habit of replacing it. It was a small detail that made a big difference.”

Kulp says that image stayed with him when he moved to Manhattan two years ago.

“Every day when I walked to the train in East Harlem, I’d walk by this basketball court where kids were playing before school, before running into class, and after school when I got off from work,” he says. “They never had nets, and it looked sort of depressing.” 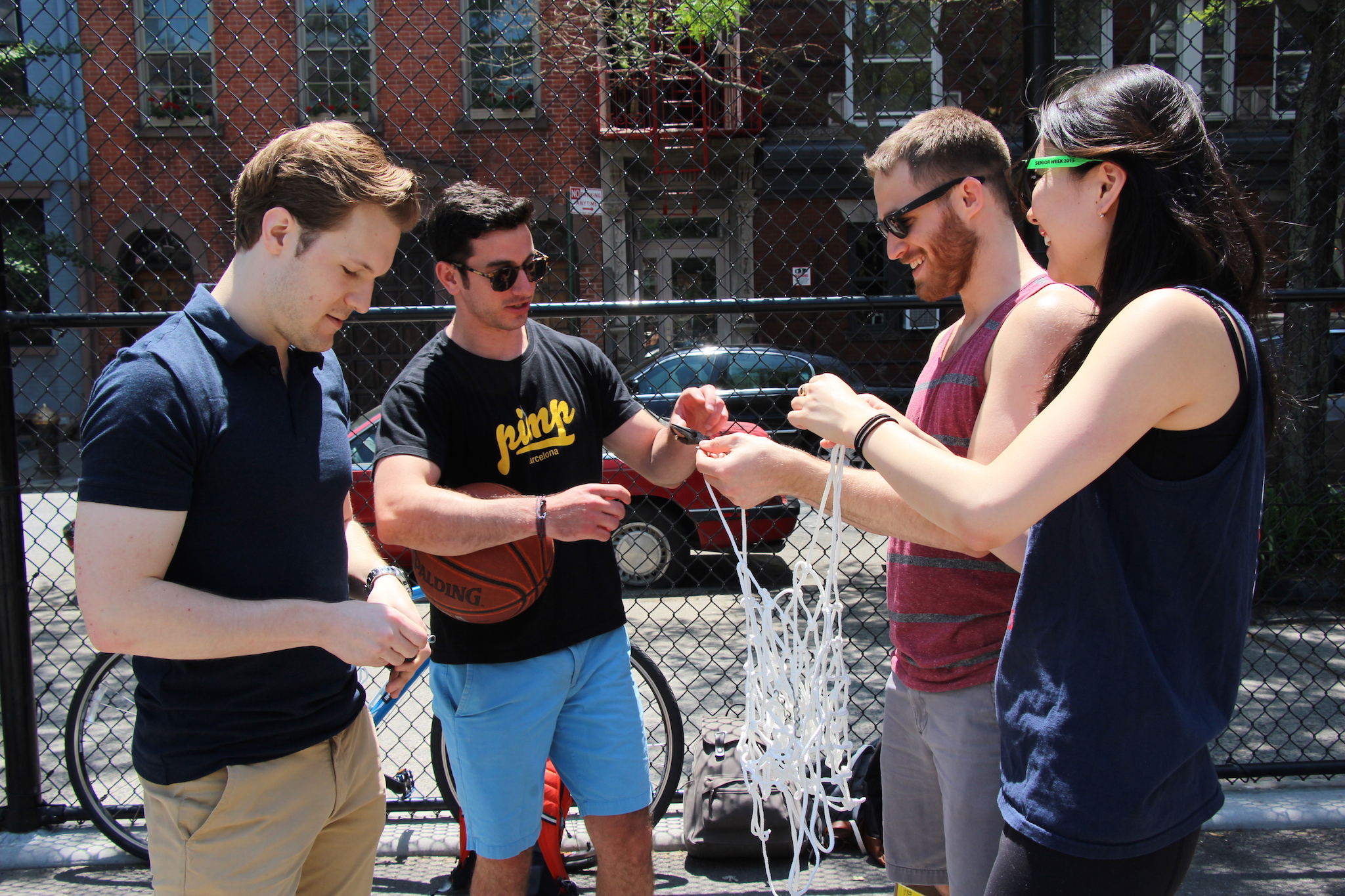 12 Loops is a major departure from Kulp’s past professional work: software, marketing, and events coordination for marquee-name clients including Red Bull, Coca-Cola, Samsung, and Audi. He currently spends his days at Sprinkle, a startup he founded that’s based at WeWork Fulton Center. The company specializes in user acquisition and software development.

This campaign marks a new area of exploration for Kulp. Many entrepreneurs have side-projects, he notes, but most are purely business ventures. Funded via an ongoing Indiegogo campaign, 12 Loops is entirely run by volunteers recruited through its website, as well as through Instagram and Twitter, where the latest hoops are posted.

True grassroots campaigns, Kulp points out, are not the usual methods employed in the marketing world.

“A lot of times marketers take a top-down approach, reaching out to the press so they can tell a thousand people for you, or reaching out to an investor,” he explains. “This is bottom-up. This only exists because people make it exist. There is no higher power that determines the success of this project. It depends on people volunteering and sharing the same ideals.”

His point was clear at the Seravalli Playground, where his team was able to place nets on two hoops within half an hour—and that’s working at a leisurely pace. But efficiency isn’t the only reason 12 Loops is designed to be grassroots.

“People feel the need to protect the neighborhood and improve their surrounding, and what better way to do that than to their immediate surrounding, like around the block?” Kulp asks. “They can take ownership of and adopt that court.”

For its all-volunteer team, 12 Loops is a labor of love. One young man at Seravalli Playground said he heard about the campaign three days before on the group’s Twitter page, and immediately decided to get involved. He said his love for basketball made him want to give back to the community. Another man said his involvement was spurred by his interest in nonprofits.

“There’s nothing proprietary—anyone can do this,” Kulp says. “What we’re trying to do is create an incentive to want to do it by saying it’s part of this 12 Loops project, that we can provide the resources to make this easier.”

There is room for 12 Loops to form relationships with nonprofits, sports teams, and brands, but ultimately the project is about encouraging a movement, one that is being taught to a new generation.

Kulp recalls a young boy named Jabar who, while waiting patiently for a net to be put up a few weeks ago, asked: “Why are you doing this?”

“To make basketball better,” was Kulp’s reply. Which might be the best marketing slogan he could ask for.