Make your return to the office easier—get 25% off a WeWork All Access membership for the first 3 months. Terms apply. Learn More
MEMBER SPOTLIGHT
Mark Sullivan
November 13, 2015

For a 9-year-old girl, Lily Lee seems incredibly busy. It’s not just the usual things, like doing flips in tumbling class, learning how to play the flute, and walking her dog named Lucky.

For the second year in a row, the San Francisco fourth grader has been organizing a toy drive so that foster kids can get presents for the holidays. And she does it all herself: collects the money, negotiates discounts with local stores, and delivers the toys to social service organizations.

“I actually started out when I was 4,” she says. “I used half of my birthday money to buy a couple of toys and a book or two for foster kids.”

This year, she’s taking her campaign online with a brand new website called Give With Lily. This part she needed a little help with, since she’s the kind of kid who prefers sketching out her ideas in an old-fashioned notebook.

She turned to her father, mortgage loan officer Sam Lee. A newcomer at San Francisco’s WeWork Mid-Market space—his company moved in at the beginning of November—he decided to hire a graphic designer from the company’s members network.

That’s when he heard from Anthony and Ashley Quach, members at Portland’s WeWork Custom House space since it opened at the beginning of the month. The owners of twelve55 offered to do it all for free, from designing a logo to building a website to organizing a social media campaign. 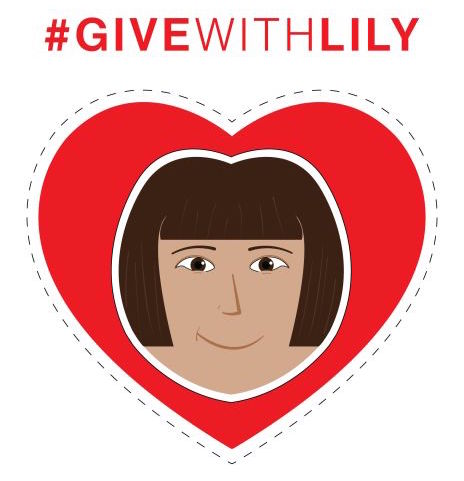 “It was amazing how fast it came together,” Sam says. “They agreed to do it last Thursday, and we got them the content by the weekend. It was basically all finished by Monday night. They even designed her a business card, for goodness sake.”

Quach says his “eyes lit up” when Sam described the project to him.

“When we learned of the opportunity to help such a passionate, selfless, and giving young person,” Quach says, “it just made sense that we championed the project.”

Sam says he’s overwhelmed by the support he’s gotten from other WeWork members.

“My experience is that the community here really rallies around you,” he says. “It’s awesome.”

Coming from the business world, Sam says he’s been impressed with Lily’s business savvy. He laughs as he talks about driving Lily to a store where she was planning on buying a few children’s books.

“I’m at the car putting money into the meter while Lily goes into the bookshop,” Sam says. “By the time I feed the meter, she has already negotiated a 30 percent discount from the owner.”

This year’s campaign has already raised more than $3,000, which will be used to buy toys, books, and clothing for foster kids through two local groups, Sleep Train Foster Kids and Larkin Street Youth Services.

Sam says they are also encouraging people to donate to organizations helping foster kids in their own areas. They can then post photos of their gifts on social media using the hashtag #GiveWithLily.

Lily says she’s never met any of the kids who benefit from her project, but she can imagine them opening their presents.

“It feels really good to help,” she says. “I’m pretty sure it does put a smile on their faces.”

Interested in workspace? Get in touch.
TRENDING NOW
01 What is cash flow and why is it important? 02 How burnout threatens to erode workplace mental health 03 serhii 04 TheLi.st and WeWork spotlight women changemakers