Redefining the future of work while revitalizing cities

When Chris Ferzli stepped into her role as head of public affairs for Americas at WeWork this past January, her first goal was to meet local leaders, city councils, chambers of commerce, and economic development committees in WeWork’s major markets to learn about their priorities.

As her conversations unfolded, she quickly found that leaders in each city were bringing up the same theme: “What does the future model of the workplace look like, and how do we get there while fostering economic prosperity?” she says. “And how do we make sure we’re building something that is more resilient and flexible for the future?”

Cities need life to return to their coffee shops and lunch spots, to their subways and newsstands. And as workers and students cross the one-year mark of the global pandemic, they need flexibility and safety.

It’s this set of needs that inspired Ferzli to launch WeWork’s city partnerships program, a public-private model designed to bring people back to city centers in a sustainable, future-facing way. So far, WeWork has city partnerships with Miami, Washington, D.C., and New York City.

As part of these new deals, WeWork is offering a suite of membership incentives to businesses and individuals. These include two months free on a private office space with a six-month commitment, and a one-month free trial of WeWork All Access, a subscription that allows members to work out of hundreds of WeWork locations globally, plus 15 percent off after that trial for up to 12 months. Key to the program is the flexible, hybrid model of the workplace that WeWork has pioneered and long championed.

Along with the workspace incentives (and the foot traffic that goes with them), the other pivotal component of the city programs is data: from how many people come to the office each day to when they use the office to cleanliness and safety ratings. WeWork is harnessing its scale and technology to help cities understand return-to-work trends and make more informed decisions.

“Right now cleanliness and productivity are skyrocketing in our data,” says Ferzli. “We’re seeing that across markets, so we know that people are feeling more productive and are feeling like it’s clean and safe [to be in the office].”

The team is trying to understand what the priorities of each city are, and then tailoring the data being provided based on that city’s priorities, Ferzli says.

Some of the trends emerging from the numbers include what days people are coming into the office and how they’re balancing home and work. In some cities, for example, it’s primarily Tuesday to Thursday in the office, with bookended weekends at home. And in New York, primarily small- to medium-size companies are coming back to work with flexible work models. And finally, WeWork is customizing dashboards for each city.

“The city partnerships program is a win-win-win model. WeWork is providing more space for more members, and we grow our membership base through this,” Ferzli says. “At the same time, hopefully it helps cities foster economic recovery, and the businesses recognize and understand, in a flexible way with options, what is best for their business.”

Behind the scenes, in each city, the program involves myriad stakeholders across multiple public and private departments and operations. Ferzli’s background has positioned her well to take on this kind of work.

First, she has taken a crash course in sustainability, not just in terms of the natural environment but also in the infrastructure of business and society overall. While working as a white-collar defense attorney in Washington, D.C., her biggest client was an oil company. Through that experience, she learned about the nuances and context of her client’s business—and discovered that she wanted to work on projects she believed in.

With that in mind, she went on to become legal counsel and strategy director for First Lady Michelle Obama’s nonprofit, Partnership for a Healthier America. In that role, she got her bridge-building, community-problem-solving feet wet. She built partnerships driven by data, showing that you can move the needle on doing well while doing good, she says.

Among the programs Ferzli facilitated was a city fruit and vegetable program that measured changes in consumption habits and overall health statistics. She also partnered with food companies to track key health indicators like sodium and sugar levels. And she spearheaded partnerships with celebrities and spokespeople to help raise the organization’s visibility. For Ferzli, the role was transformational.

“That’s where I fell in love with the idea of taking a holistic approach to a problem across different sectors, both internally and externally,” she says. “I was able to build four to five different programs and absolutely loved my time there.”

When the Obama administration came to a close, Ferzli moved to the Milken Family Foundation, where she worked in the investor space around pro-social startups promoting things like alternative meat. From there, she joined Ocean Spray as head of corporate affairs, just as the cranberry-centric company was rebranding itself as a health and wellness enterprise. (She also learned to skateboard while drinking juice and lip-synching to a Fleetwood Mac song.)

By the time Ferzli landed at WeWork this year, she was well versed in both the unique possibilities and diplomatic requirements of public-private partnerships. One of the delights of the initiative so far has been the stream of ideas not only from WeWork but from city stakeholders.

Among her favorites is a proposal from Washington, D.C., to extend WeWork coworking spaces to unused outdoor plazas. With indoor capacity currently limited to 25 percent, outdoor expansion would mean that more people can access workspaces and make their way back to urban centers.

Meanwhile, in New York City, the Queens Chamber of Commerce will be using a WeWork conference room once a week to help WeWork members with business resources. Pandemic restrictions curtailed the Chamber’s ability to hold meetings at its home office, leaving it without an option to continue in-person information sessions—until now.

The future of work

Ferzli is now back in the office most days and at home on the others. Her thrill over the arrangement is palpable, even over the phone.

“I can’t tell you how amazing it is to sit next to colleagues and be able to bounce ideas off one another,” she says. “Or if an email comes in and someone’s busy, saying, ‘Hey, can you take this?’ And getting an immediate, vocal answer. I forgot how important that is.”

Ferzli believes that what people miss most is community and the natural creativity that stems from physical proximity. She points to the mental health boost of being around other people, and the energy that can only come from in-person discussions. There’s also the natural boundary between home and work that exists by being in distinct, physical spaces.

Still, says Ferzli, safety concerns are still top of mind for most people considering a return to the office. To that end, as Ferzli continues to build WeWork’s city partnerships, she’s also moving forward with other public affairs initiatives. Chief among them is a potential partnership with national organizations and federal administrative bodies to co-create standards for health and safety in a COVID-affected world.

“As we think of this hybrid model moving forward, we have to think about a sustainable future,” she says. “A way that works for productivity, for mental health, for employers, for employees, and has long-term legs behind it.”

Anna Dimond is a writer, editor, and content producer based in Los Angeles and Cape Cod. She covers the outdoors, culture, business, and politics for The Washington Post, ESPN, and Red Bull, among others.

FILED UNDER
FLEXIBILITY IMPACT HYBRID SPACE
Interested in workspace? Get in touch.
TRENDING NOW
01 Bringing an iconic L.A. entertainment landmark back to life 02 How innovation is transforming the financial sector 03 Prioritizing mental health in the new world of work 04 Why companies need to think in terms of “and,” not “or”
Was this article useful? 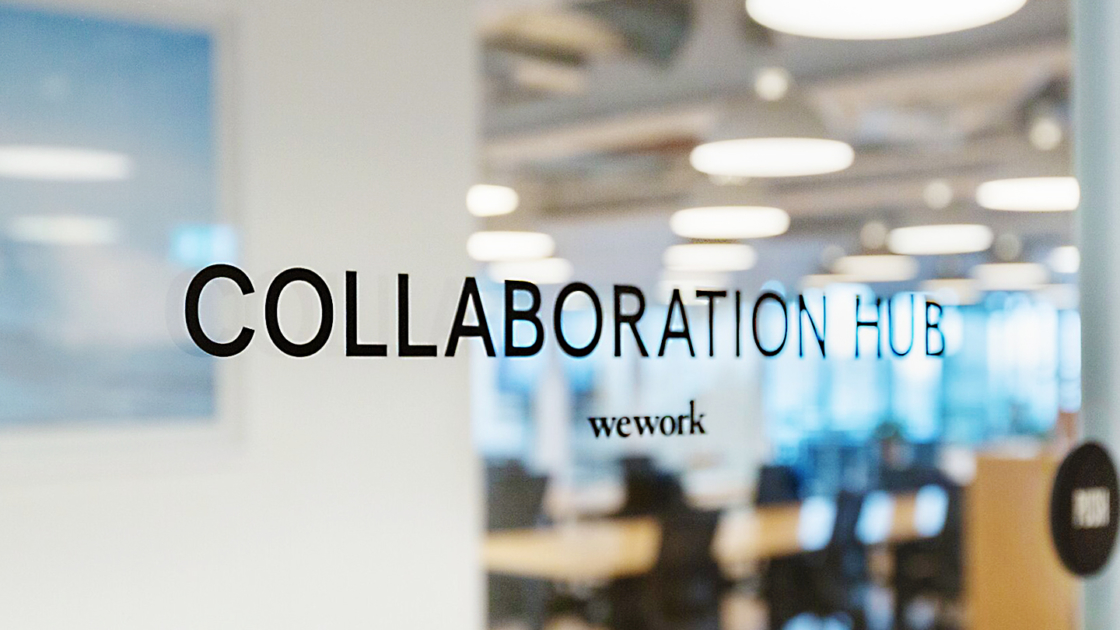 How three companies use collaboration hubs 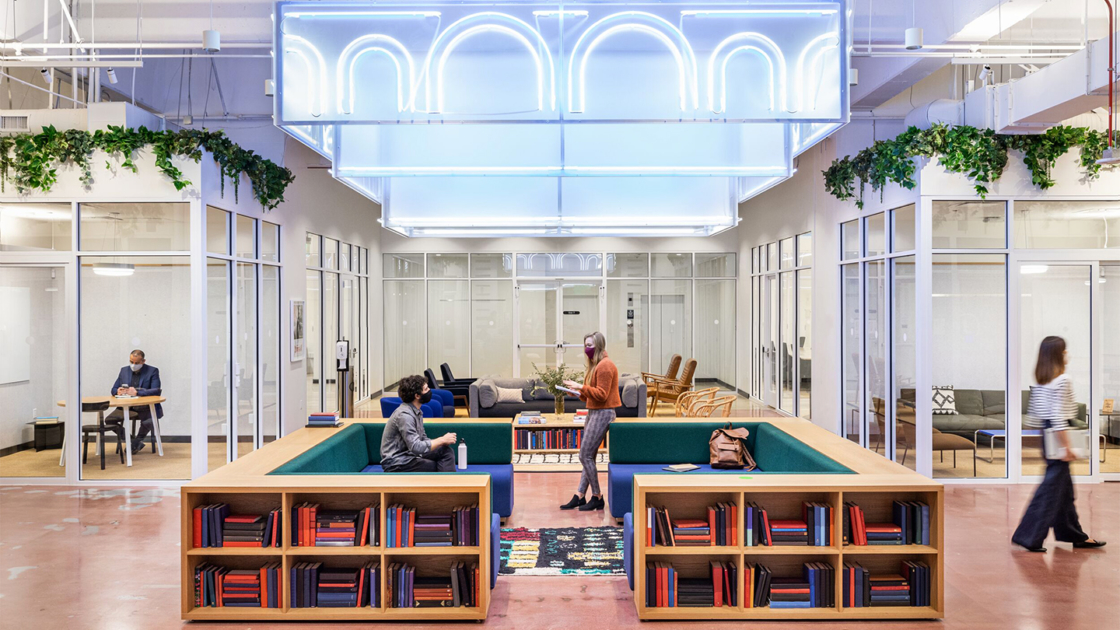 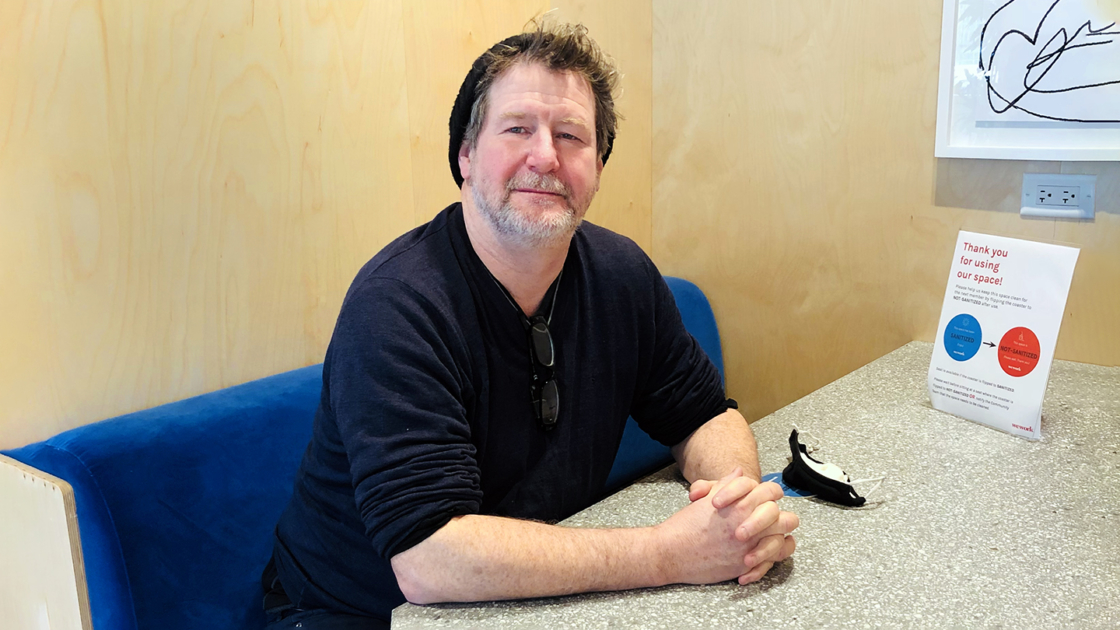